With the new year (and part of January) behind us, many are looking forward to what 2016 holds for the real estate world. In this article, we discuss Esquire Real Estate Brokerage, Inc.’s 2016 real estate predictions.

Last year, we discussed predictions from a variety of sources, including Home Buying Institute, Realtor Magazine, California Association of Realtors, Mortgage Bankers’ Association, Freddie Mac, and Zillow. In sum, they predicted increased mortgage interest rates to an average of between 4.5% and 5%, slowed increases in home prices, decrease in home affordability, and a decrease in foreclosures. In our 2015 Real Estate Predictions, we questioned whether interest rates would truly rise, due primarily to the relatively high unemployment rate of 5.8% at the beginning of 2015.

What Others Are Saying About 2016 Real Estate Predictions

Our primary issue with the above predictions is, again, whether interest rates will rise as much as others are predicting. The Fed has expressed that it’s primary two concerns when considering raising the target interest rate are (1) unemployment and (2) inflation. Of course, it also considers economic growth as a whole. As a result, the prediction that mortgage interest rates will continue to increase, especially by as much as 0.60% by the end of the year, is not necessarily accurate, particularly given current low inflation rates and the tumbling stock market. 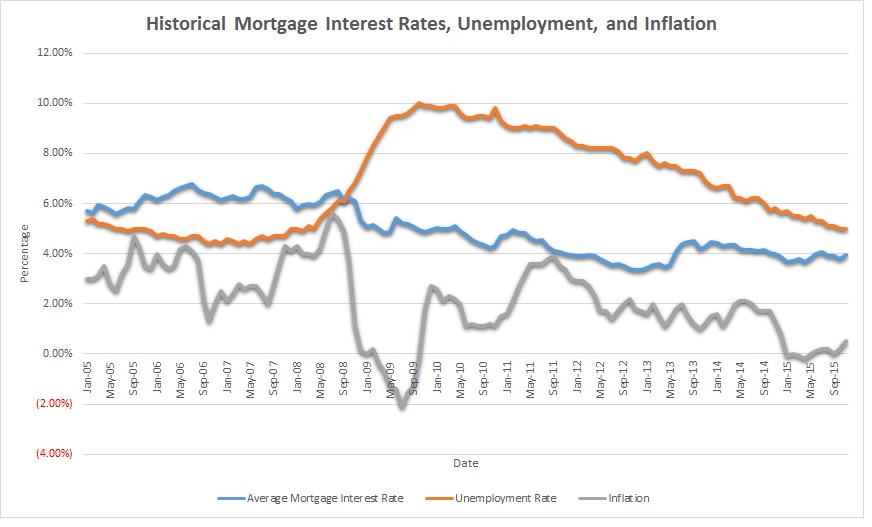 Due to low inflation, the Fed will likely act extremely cautiously in considering further increases to the target interest rate. This is particularly true in light of the impact of stock market’s recent decline on the general economy.

As a result, while we generally agree that there is no reason for housing market gains to show any significant signs of slowing, we disagree with any prediction of significant increases in average mortgage interest rates in 2016. At most, we predict the Fed raising the target interest rate by 0.5%, but certainly no more than that. Low interest rates will likely continue to encourage buyers to enter the market, as will low unemployment rates.

If you would like to further discuss Esquire Real Estate Brokerage, Inc.’s 2016 real estate predictions and how we can help you in the Los Angeles real estate market, feel free to give us a call at 213-973-9439 or send us an email at info@esquirereb.com.