The Boyle Heights real estate market consists largely of multi-unit and mixed-use properties – in the past three months, 64% of sold residential properties were multi-unit properties.  Many of its commercial spaces are contained in mixed-use properties, with residential units on the top floor and commercial space on the bottom.  In the third quarter of 2014, the median sale price of a single family home was $300,000.00 and the median sale price of a residential income property was $425,000.  Generally, Boyle Heights is primarily a residential neighborhood with a rich Latino culture.

Boyle Heights’ convenient location and affordable real estate, combined with the boom of Downtown Los Angeles and the Arts District, has resulted in a recent influx of buyers and investors looking to create and capitalize on potential growth in the area.  Some of the most notable recent developments have been a new Walgreens in 2012, the 2013 sale of Sears Tower to Downtown developer Izek Shomof, and the introduction of the first free-standing Starbucks in Boyle Heights in July of 2014. 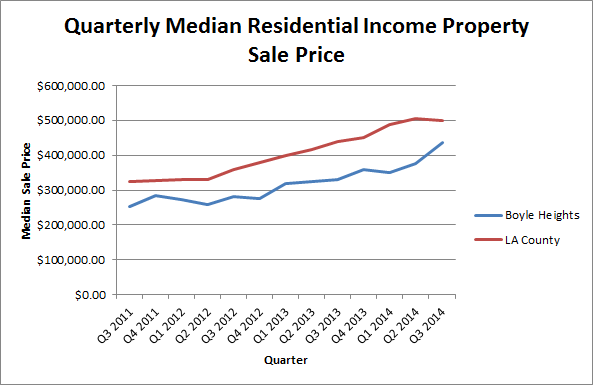 The influx of investors, combined with the historically high percentage of Latino residents, has raised significant concerns of gentrification in the area.  In fact, one unfortunate real estate agent who distributed fliers in Downtown stating “Why rent Downtown when you could own in Boyle Heights” and offering to take individuals on a bike tour, issued an apology after being accused of contributing to gentrification in the area.

At the same time, there has been a counter-movement by the Latino community, calling improvements “genteficiation“, deriving from the Spanish word “gente” meaning “people”.  The term refers to Latino and Hispanic investors who are focusing on improving the area while maintaining its culture.  This phenomenon is largely unique to Boyle Heights in that it has seen a significant influx of former residents who are interested in returning to their home and improving the area for future generations.

If you would like to further discuss how Esquire Real Estate Brokerage, Inc. can help you in the Los Angeles and Boyle Heights real estate markets, feel free to give us a call at 213-973-9439 or send us an email at info@esquirereb.com.