It is, by far, the most common question asked about the real estate market by friends, family, clients, and strangers alike – “When is this housing bubble going to burst?”  I always respond with a question of my own – “Why do you believe we are in a bubble that is going to burst?”  The answers vary, but they tend to all be based on the same underlying assumptions, i.e. the real estate market is cyclical and prices are now higher than they were before the recession, which was about 10 years ago, so surely we are due for another burst of the housing bubble.  In this article, we look back in time to explore the current myth of the housing bubble and whether it is based on historical fact.

Before looking at the data, it’s helpful to first understand what caused the most recent recession and decline in housing prices, and how the most recent recession was different from others.  Without getting too complicated, at its core the “Great Recession” was caused by bad mortgage lending practices, or “subprime mortgages”.  When the housing market began to deflate, more and more homeowners began to default on their loans, resulting in a flood of housing inventory and the collapse of mortgage-backed securities, leaving banks with their proverbial “pants down”.  This explanation is admittedly very simple, but the point is that the real estate market and lending practices were at least one of the core causes of the recession, and the recession was tied directly to record mortgage defaults and foreclosures.  This made the most recent recession fairly unique – the housing market was tied directly to the cause of the recession, rather than a drop in the housing market being an effect of the recession.  Additional information about the causes of the Great Recession can be found here.

We know that the recent recession resulted in a significant drop in the housing market – somewhere between 25%-35%.  But what happened to the housing market in other recent recessions?  Was there a similar drop?  Is the housing market truly cyclical, with a “burst” of the bubble every 8-12 years, similar to the overall economy?  In order to answer these questions, we looked at the historical monthly percentage change in the average price of an existing single family home in California, and compared that to the historical monthly percentage change in the S&P 500.  A graph summarizing the data is below – the orange line reflects changes in the housing market and the blue line reflects changes in the S&P 500. 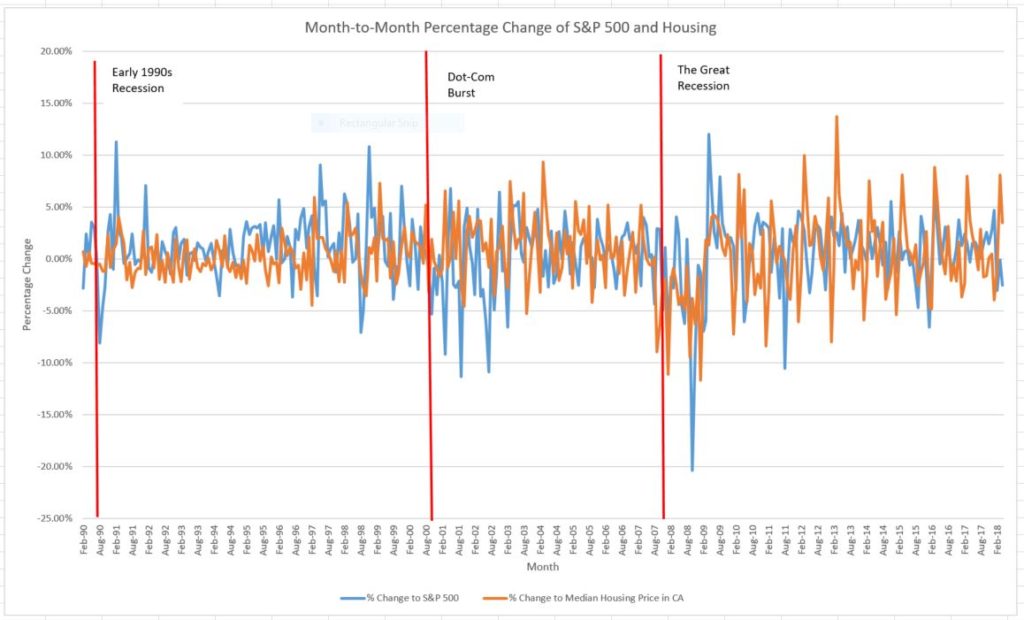 The data appears to show that housing prices tend to be relatively stable, even during times where the economy as a whole is suffering.  The Early 1990s Recession saw a dip in the S&P 500 of almost 10% in one month, whereas the real estate market remained stable.  The early 2000s Dot-Com Bust saw several months of the S&P 500 declining more than 10%, whereas the housing market again remained relatively stable.  The Great Recession, however, is markedly different insofar as we first see significant downward spikes in the housing market, followed by a plunging S&P 500, and a subsequent relatively unstable housing market.

What Does This Mean?

The above data shows that housing is not necessarily as cyclical as many people currently tend to believe.  While the overall economy tends to experience slumps and highs about every 10 years, the same is not necessarily true of the real estate market.  In fact, over the past 30 years, real estate has been a relatively stable investment.

The explanation for the differences between the Early 1990s Recession and Dot-Com Burst, as opposed to the Great Recession, likely goes back to the cause of the Great Recession.  While recessions can surely be caused a decline in the housing market, a recession does not necessarily have the effect of a decline in the housing market (or at least not as drastic of a decline as the overall economy).

So let’s go back to the original question in response to a question – “Why do you believe we are in a bubble that is going to burst?”  Perhaps you believe that subprime mortgage lending practices have continued or that there is some other fraudulent activity propping up the real estate market.  However, if you believe that the real estate market is cyclical, or that prices have been going up for too long, or that we are simply due for another recession, I would urge you to consider the above.