Hermosa Beach, much like the rest of the South Bay, is one of Los Angeles’s well-kept beach city secrets that has not yet been tainted by tourism.  It’s removal from the busier areas that are more frequently visited by tourists makes it particularly appealing to celebrities and athletes, including Daniel Tosh, Kim Lyons, Carson Daly, Jason Acuna, and more.  It’s removal from the busier Los Angeles regions, large homes situated close to the beach, and excellent school district make the Hermosa Beach real estate market extremely desirable for Los Angeles residents looking for a relaxed, beach-living life style.

Hermosa Beach is located in the “South Bay” of Los Angeles, south of LAX, west of the 405, northwest of San Pedro, and bordered by the Pacific Ocean along the west.  It is one of three beach cities within the South Bay (the other two are Manhattan Beach to the north and Redondo Beach to the south).  While the South Bay is relatively large, Hermosa Beach is a small area, only 15 blocks east to west and 40 blocks north to south.  The area centers largely around Pier Avenue and the Hermosa Pier, which is home to restaurants, bars, the Comedy and Magic Club (Jay Leno performs here every Sunday), volleyball courts, and a vibrant nightlife.

According to the 2010 U.S. Census, Hermosa Beach’s population is 19,506, with a population density of 13,673.6 people per square mile (the area is 1.427 square miles).  The population is primarily white (86.8%) and, according to the Los Angeles Times’ Mapping Los Angeles project, has a relatively high median income, residents are relatively highly educated, and it has a high proportion of never married males, never married females, and divorced males.

Hermosa Beach has its own elementary and middle school – Hermosa View and Hermosa Valley – both of which are ranked 10/10 by GreatSchools.  Residents are permitted to choose between Mira Costa in Manhattan Beach (ranked 10/10) or Redondo Union (ranked 8/10) for high school.

The below map provides a breakdown of the various regions of the Hermosa Beach real estate market.

The Sand Section is the most expensive area of the Hermosa Beach real estate market.  It is bordered by the Pacific Ocean on the west and Valley Drive on the east.  These properties, which are all within walking distance to the beach, routinely sell for over $1.5m.  Those with direct views to the ocean regularly ask for over $2m.  Homes along the Strand, a walkway that borders the beach starting in Torrance and ending in Santa Monica, sell for up to $10m, making the area one of the most expensive places to live according to Money Magazine.  The area is highly dense (properties typically have extremely small yards, if any) and is the embodiment of beach living.

Although its name indicates otherwise, this portion of Hermosa Beach real estate is situated on a hill just east of the Sand Section and west of Pacific Coast Highway.  This area contains a large proportion of townhomes and condominiums due to zoning requirements, with single family homes being restricted primarily to the northern half of Hermosa Beach in this area.

The Hermosa Beach East section is bordered by Pacific Coast Highway on the west and Redondo Beach on the east.  Many of the homes here offer stunning panoramic views of the ocean and the rest of Hermosa Beach.  Homes here are typically situated on larger lots and are more affordable than the remainder of Hermosa Beach, but largely remain within walking distance of the beach.  There are some townhomes in the southern portion of this area, but the properties are primarily single family homes.

Prices in the Hermosa Beach real estate market only relatively recently started to increase, but they have increased rapidly.  Between 1999 and 2005, real estate prices increased almost 20% per year.  More recently, prices have continued to steadily rise, particularly in the most recent two quarters. 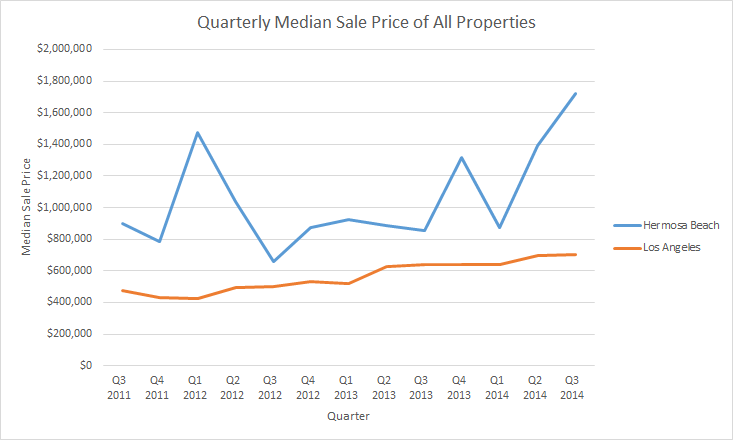 Because Hermosa Beach is such a small town, the large fluctuations in price can also be partly attributed the small quantity of properties that are bought and sold every quarter.  However, on a quarter-to-quarter basis, there is a clear trending increase that will likely continue so long as the overall market in Los Angeles continues to grow.  Overall, the Hermosa Beach real estate market promises an extremely stable investment opportunity due to its location and excellent school districts.

If you would like to further discuss how Esquire Real Estate Brokerage, Inc. can help you in the Los Angeles and Hermosa Beach real estate markets, feel free to give us a call at 213-973-9439 or send us an email at info@esquirereb.com