On Tuesday, February 24, the Inglewood City Council approved a $1.86 billion plan to redevelop the former Hollywood Park Racetrack by replacing it with an 80,000-seat, 60-acre stadium as well as homes, offices, stores, parks, open space, and a hotel. The Inglewood City Council unanimously approved the measure without calling a public vote, effectively fast-tracking the project and side-stepping environmental review, in a move designed to reduce the leverage of a competing bid from the San Diego Chargers and Oakland Raiders to build a stadium in Carson.

That changed on Monday, January 5, 2015 when St. Louis Rams owner Stan Kroenke announced plans to build a new stadium in Inglewood. The announcement was made a year after purchasing 60 acres of land adjacent to the Forum and Hollywood Park. The plans involved collecting signatures to place the “City of Champions Revitalization Project” on the Inglewood municipal ballot in 2015.

Shortly thereafter, on Thursday, February 19, 2015, the Oakland Raiders and San Diego Chargers released a joint statement announcing plans to build a shared $1.7 billion stadium in Carson.  According to ESPN, the Chargers had initiated talks to build the stadium nine months ago, with the Raiders later joining the talks, and that the plans intensified after Kroenke’s announcement in January of 2015 regarding his Inglewood proposal.

In response, the Inglewood City Council held a meeting and heard several hours of public comment, after which it unanimously approved Stan Kroenke’s stadium plans without holding a public vote, thereby enabling construction to begin and avoiding environmental review of issues such as noise, traffic and air pollution.

The Inglewood Stadium And Revitalization Proposal

The Inglewood Revitalization Project is a 298 acre project that will include an 80,000 seat stadium, a smaller 6,000 seat indoor entertainment venue, 890,000 square feet of retail space, 780,000 square feet of office space, a hotel of up to 300 rooms, up to 2,500 new residential units, and approximately 25 acres of public parks, open space, and and pedestrian and bicycle access. The project is funded entirely by private funds, meaning it costs taxpayers nothing. Additional information can be found at the Revitalization Project’s official website, here. A site plan for the project is below. 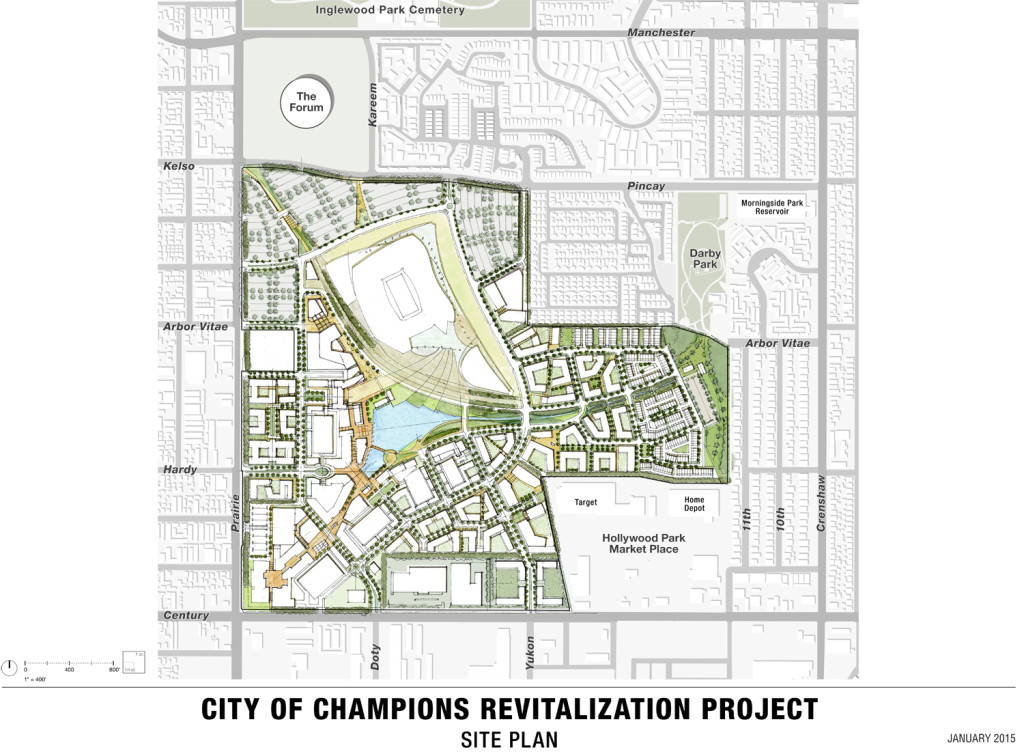 Interestingly, there is nothing that guarantees the stadium will be occupied by the Rams, another football team, or even any other sports team. The project is a “risk” that is being taken on by Mr. Roenke, but is likely one that will pay large dividends upon the arrival of a sports team to occupy the space.

Even before the announcement of the Inglewood stadium plans, the Inglewood real estate market was poised for significant growth. So much so that Curbed named Inglewood Los Angeles’s 2014 Neighborhood of the Year. The title was awarded largely due to the Los Angeles Forum’s recent revitalization, as well as the new north-south Crenshaw Line, which will connect the mid-city Expo Line to the South Bay’s Green Line, making public transportation from the South Bay to Santa Monica or Downtown a realistic option.

Adding the Inglewood Revitalization Project to the above promises nothing less than a boom in the Inglewood real estate market. According to the Los Angeles Times, the stadium project promises $1 billion per year for the local economy and 40,000 new jobs. The influx of new jobs and money into the economy almost guarantees an increase in demand for real estate in the area, which is sure to drive prices up. Good news for Inglewood home owners, but potentially bad news for renters who may see their rent increase substantially with increased demand.