While they are all within the same city, the zip codes can be drastically different in price.  Generally speaking, the further one ventures north in Santa Monica, the more suburban, and expensive, the area becomes.  Similarly, as one travels west toward the beach, the Santa Monica real estate market becomes progressively more expensive.  The below graph of median quarterly residential sale prices in Santa Monica illustrates the stark difference in pricing between the 90402 zip code, the northernmost zip code, and the remainder of the Santa Monica real estate market over the past three years. 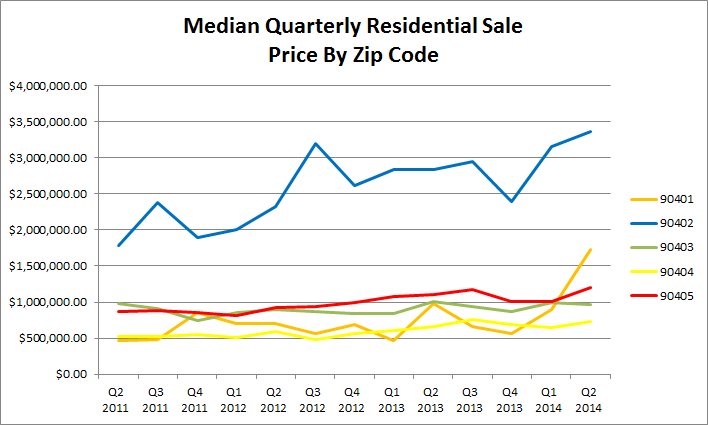 The zip codes are also drastically different in character.  The 90402 and 90405, the northernmost and southermost, zip codes consist primarily of single family homes.  The 90402 zip code, predictably given its expense, contains larger properties on larger lots, while the 90405 zip code is more dense and contains smaller homes and lots.  The central zip codes of 90401, 90403, and 90404 are more dense, with 90401 containing a large proportion of condominiums and the 90403 and 90404 zip codes containing a higher proportion of townhomes.  The 90401 and 90404 zip codes contain more commercial property and are more dense due to their proximity to Downtown Santa Monica, while the 90403 zip code is more residential.  The below graph displays the difference between the zip codes with respect to property types. 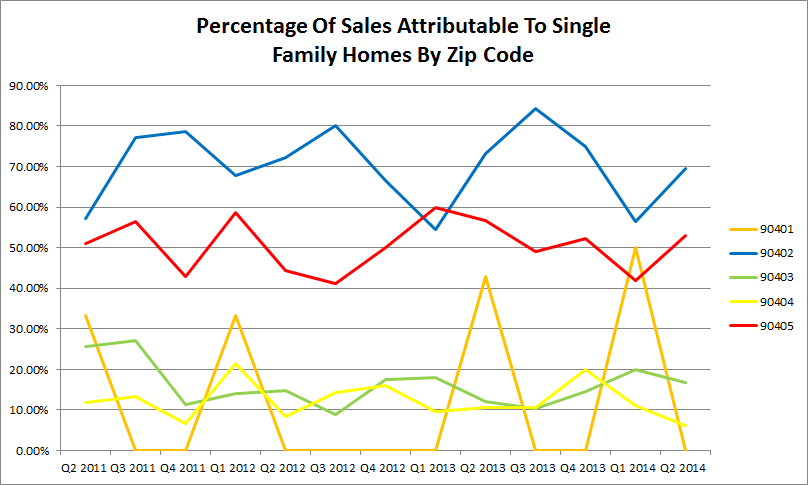 Thus, purchasers looking for single family homes will likely have more success in the 90402 and 90405 zip codes, while purchasers of condominiums and townhomes will find more properties in the central zip codes of 90401, 90403, and 90404.

As is normally the case, the school districts within the Santa Monica real estate market play a major role in determining supply, demand, and price.

The Roosevelt Elementary School district (ranked 10/10 by Great Schools) overlaps the western portions of the 90401, 90402 and 90403 zip codes.  The price per square foot in the region can exceed $1,000, with single family homes in the 90402 zip code selling comfortably above $4,000,000.00.  Given the overlap into the 90401 zip code, there are also opportunities for less wealthy home buyers to secure townhomes and condominiums at more comfortable price ranges.  However, opportunities in the 90401 zip code are limited, with only 63 residential units having been sold in the past three years.  The Roosevelt Elementary School district area is also serviced by Lincoln Middle School (9/10) and Santa Monica High School (8/10). 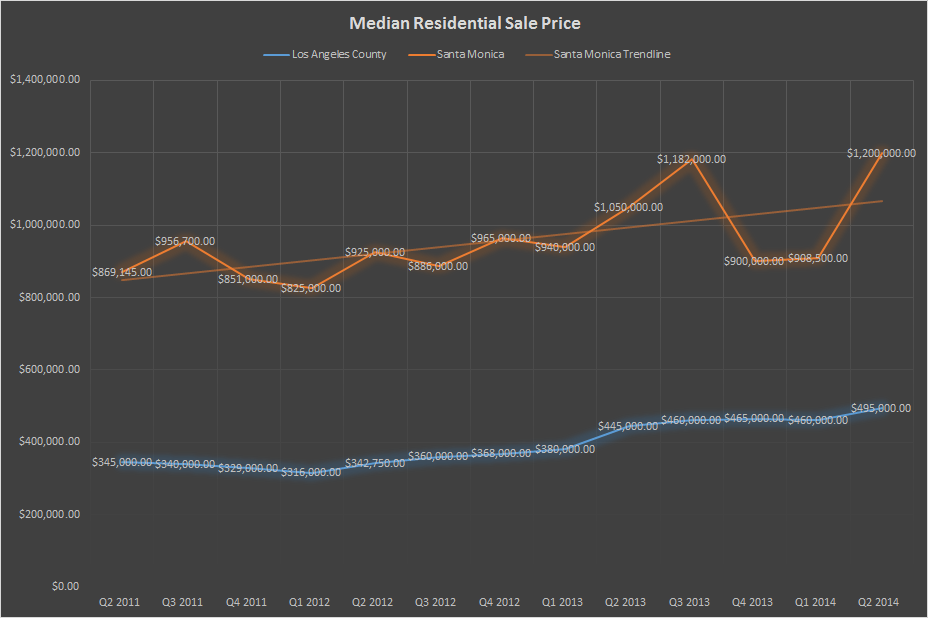 If you would like to further discuss how Esquire Real Estate Brokerage, Inc. can help you in the Santa Monica and Los Angeles real estate markets, feel free to give us a call at 213-973-9439 or send us an email at info@esquirereb.com.