The Wilshire Corridor is one of Los Angeles’s most famous landmarks. The towering buildings lining Wilshire Boulevard are regularly depicted in movies and photography, and the broad, winding road is often used for shooting car scenes and chases. Due to its character and convenient location, the Wilshire Corridor has become increasingly popular for home buyers looking to live in a central location and avoid Los Angeles’s infamous traffic.

The Wilshire Corridor, also referred to as the “Golden Mile” or “Millionaire’s Mile”, is an approximately 1.5 mile stretch of Wilshire Boulevard between the 405 freeway and Beverly Hills. It consist primarily of high-rise condominium buildings, as well as several commercial buildings, including the Fox and MGM studios.

The Wilshire Corridor is hugely popular due to its extremely convenient location. Situated just northeast of the intersection of the 405 and 10 freeways, all areas of Los Angeles are easily accessible. It is walking distance to UCLA and the Westwood Village, a short drive to the Santa Monica beach, and easily accessible to Century City’s office buildings and Westfield Mall.

As its nickname indicates, condominiums on the Wilshire Corridor regularly sell for over $1 million. While there are smaller units that sell for under $1 million, penthouse units can sell for upwards of $20 million. As indicated by the below graph, the median sale price of condominiums on the Wilshire Corridor has been steadily increasing since 2011, with prices increasing markedly since he first quarter of 2013. 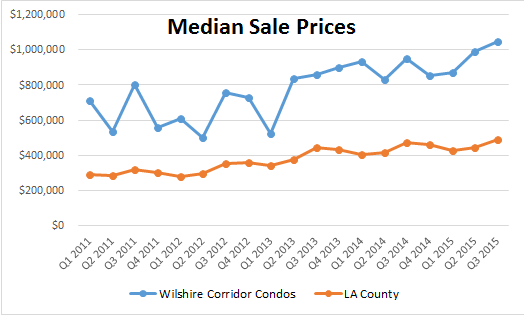 The increase in median sale price on the corridor since 2011 has tracked closely with LA County generally. As shown below, it has outpaced LA County in 9 out of 18 quarters since 2011. 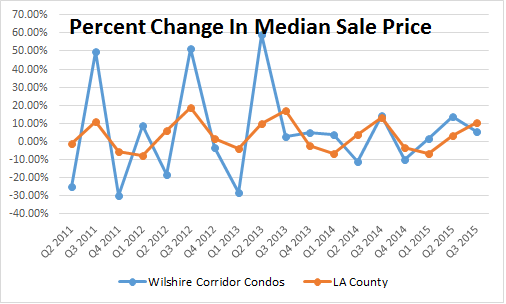 Due to its popularity and high demand, the Wilshire Corridor has not seen significant growth outpacing the rest of LA County because it was one of the areas least-affected by the recent recession. It is this popularity and high demand that promises a stable investment that is attractive to risk-averse buyers. As a result, the Wilshire Corridor remains a viable investment for home-buyers looking for a central location with easy access to many of Los Angeles’s most popular areas.

If you would like to further discuss how Esquire Real Estate Brokerage, Inc. can help you in the Downtown Los Angeles real estate market, feel free to give us a call at 213-973-9439 or send us an email at info@esquirereb.com