In the past decade, Downtown Los Angeles has seen a transformation unlike any other area of Los Angeles. With the introduction of renovated lofts, restaurants, bars, grocery stores, and the Staples Center, the area has seen a huge influx of professionals who not only work there, but also reside there. As a result, the Downtown Los Angeles real estate market has surged in the past few years. What was once a place where people would come only to work has turned into a very liveable area with a vibrant night life.

Outside of Washington D.C., the Civic Center has the largest concentration of government employees in the United States.  It is also home to the famous Walt Disney Concert Hall, the Dorothy Chandler Pavilion, the Mark Taper Forum, the Ahmnason Theater, and Union Station.

These two areas are the corporate heart of Los Angeles. The areas are filled with office buildings, hotels, banks, shopping centers, restaurants, bars, and other services for the busy professionals that fill the streets during the day. Many of the buildings also contain condominiums and lofts that many workers in Downtown call home.

The South Park region of Downtown is one of the most rapidly changing areas of the Downtown Los Angeles real estate market. It is home to the Staples Center and the LA Convention Center, as well as the prominent and brand new JW Marriott Hotel (picture right).

As their names imply, these neighborhoods are home to  many stores, wholesale markets, and art galleries. Downtown Los Angeles is home to the largest jewelery district in the United States, and is almost entirely dedicated to office and retail space. The fashion district spans 90 blocks, and is home to manufacturing for many companies, including American Apparel and Andrew Christian. The toy district contains stores that primarily import inexpensive novelties and electronics for sale, and consists primarily of industrial space. Lastly, the arts district is the most “residential” of these areas. It boasts multiple art galleries, as well as restaurants, coffee shops, and office buildings that have been converted into lofts and apartments for residential use.

The historic core is currently home to many of the converted lofts and condominiums located in former office buildings. The conversions are largely the result of an Adaptive Re-Use Ordinance passed by City Council in 1999. The area is also often referred to as the “Old Bank District” as a result of the conversion of many buildings that were previously homes to large banks. Other notable conversions include The Security Building and the Pacific Electric Building.

Gallery row is home to the popular Downtown Los Angeles Art Walk, which occurs on the second Thursday of every month. It was designated by the City Council in 2003 to promote the concentration of art galleries and a pedestrian-friendly, urban area in Downtown Los Angeles. The move was criticized by many as promotion of gentrification, but has since proved to be central to Downtown Los Angeles’ transformation. 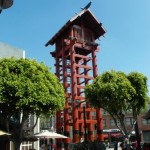 Little Tokyo, also known as the Little Tokyo Historic District, is the heart of the largest Japanese-American population in North America. It is an area of approximately five blocks, and consists mainly a work, cultural, religious, restaurant and shopping district, although the recent increase in residential construction in Downtown Los Angeles is starting to draw more permanent residents to the region.

The Downtown Los Angeles real estate market has boomed in recent years. The recent introduction of bars, restaurants, entertainment centers, and, most notably, grocery stores, has made the area “liveable” rather than somewhere to just go to work. While the area are essentially no single family homes in the area, many professionals, but young and old, are opting for condominium and loft-style living in order to not only take advantage of living close to work, but also enjoy the vibrant night life that Downtown Los Angeles now has to offer. This recent influx has resulted in a surge in demand, which as a result has driven prices up, as shown below. 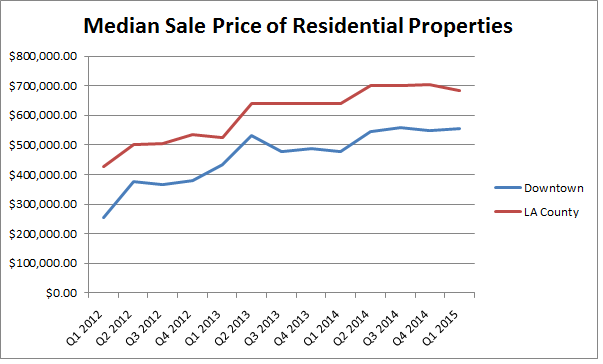 Overall, Downtown Los Angeles remains a viable option for buyers who are looking for potentially significant growth in investment. The area’s recent changes make it an extremely attractive option for professionals who work in the area and are looking to avoid LA traffic.

If you would like to further discuss how Esquire Real Estate Brokerage, Inc. can help you in the Downtown Los Angeles real estate market, feel free to give us a call at 213-973-9439 or send us an email at info@esquirereb.com